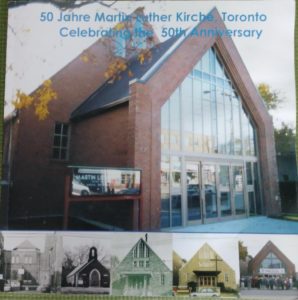 Martin Luther Church Toronto published a history book on the occasion of its 50th anniversary in 2005 entitled “50 Jahre Martin Luther Kirche, Toronto – Celebrating the 50th Anniversary” covering the years of 1955 to 2005 on 128 pages. The book was printed with the friendly support of Quattro-Marketing Inc in 2006. 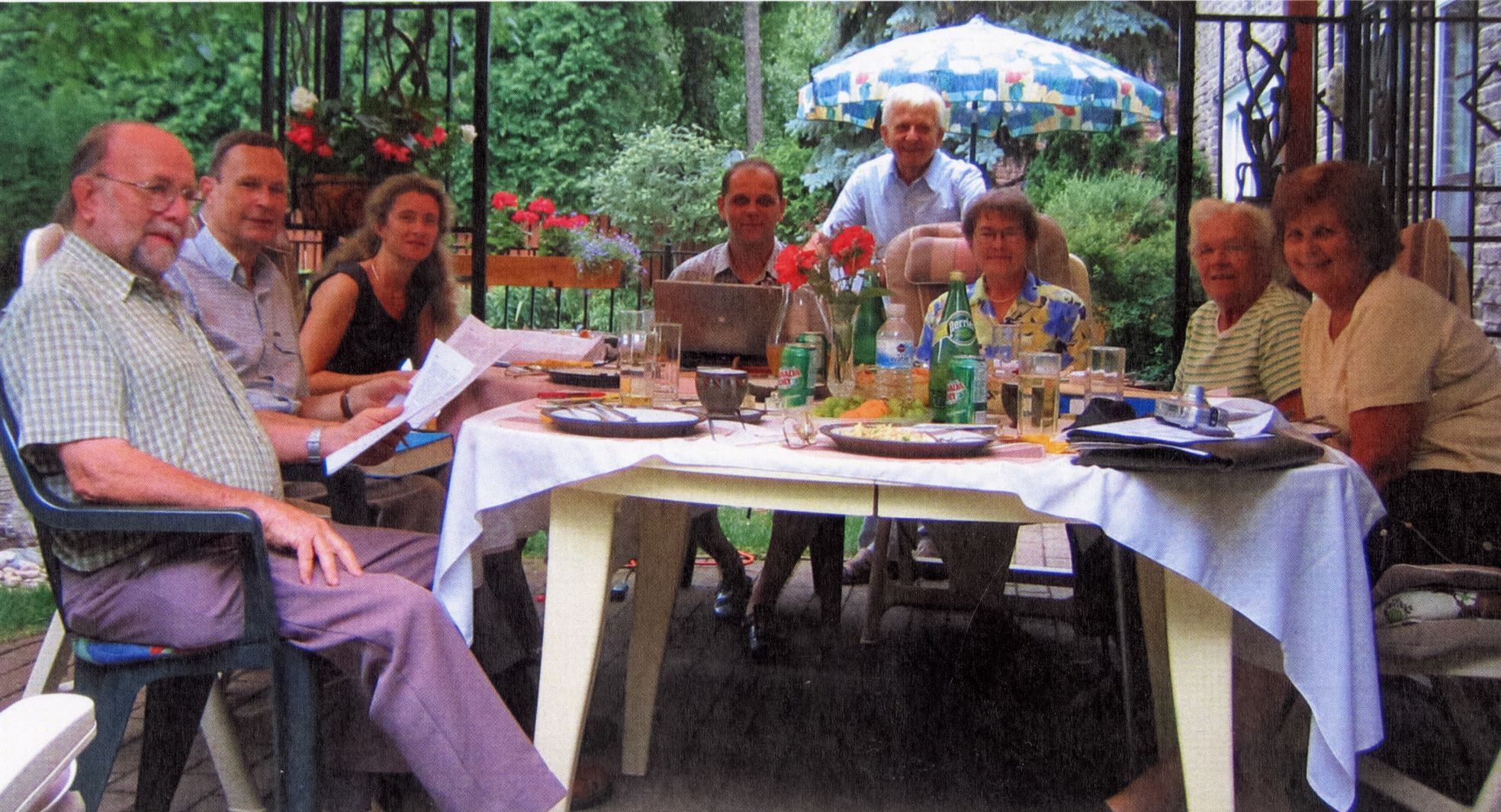 A Word of Explanation. Selecting the most important events, names and dates from among the wealth of the existing archival material and re cording these in German and English was not an easy task. The various documents like Daniel Goltz’ chronicle of the early years, the annual reports of the Church Council and the various congregational groups had to be sorted and studied with the intention of creating yearly summaries that would highlight the main events of each year without becoming repetitive. A large number of photographs were collected, sorted and se lected for their representative significance. Naturally, there were fewer articles and pictures from the early years of the congregation than from the later period and especially from the last decade or so when computers and digital cameras had fa cilitated documentation. The memory of the older members of the congregation, of whom few are alive to recall its founding, sometimes had gaps concerning the early years. Statistics had not been kept with consistency and, as a result, are not always accurate. The numbers of the official duties of the pastor frequently include those for non-members. And, no doubt, it was not possible to list all members, helpers, etc. by name. We are counting on your kind understanding. – The Editorial Committee 2006

… to the founders and first members, whose faith and trust in God was the foundation stone for this congregation.
.. to the present congregation, which with God’s help, a constant willingness to give, and with drive and action has acquired this church as a lasting place of worship.
… to our children and future generations as a legacy of our faith and as an incentive to uphold this inheritance with dignity.
… to the one God: Father, Son and Holy Spirit, for the blessing received. Glory to him from eternity to eternity. Amen. 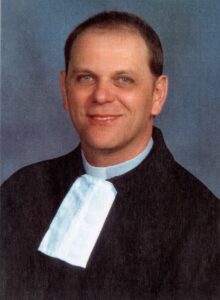 Most prefaces to commemorative publications which are written on the occasion of anniversaries of Church Congregations recall past events on which one looks back with gratitude. One recalls modest beginnings and rejoices in the fact that God, in fifty years, has turned a small group of people into a congregation with many members and functions. Often, one praises the building or talks of the many people who have come in and out of this Church in all these years. And then, most of the time, this is followed by a preview, because on the occasion of anniversaries, one likes to look ahead, too, and hopes that God will also continue his work with rich blessings in the future. All of this I can, indeed, endorse, however, I do not want to repeat it here. For as valuable and justified as reviews and previews may be, it is just as important to give thanks and to express the hope for a rosy future – we should not remember this on special occasions only, but we should constantly be aware of it. 50 Years Martin Luther Church in Toronto. […] I think, the fifty years, which lie behind us, are also a component of our Congregation and not just simply a piece of the past which one remembers with nostalgia. Our origin still plays a role today. For without the people who came before us and without the experiences of all those years, we would not be where we are today, and we could not cele brate an anniversary. Everyone has made a contribution, in the past and until today, which forms, determines and constitutes the congregation. The past is not something outdated, com pleted, but is still alive: First of all the traditions, which people have brought along from their countries of origin, serve as building stones for what the Congregation is today.  […] It is God’s presence, his blessing, his word, his love, which have always taken care that the history of the Congregation could be written continuously. It was decisive that one has again and again looked to the centre of Christian faith, to Jesus Christ himself, and one has under stood that everything remains on the mere surface if a congregation is not anchored deeply in communion with Christ. In Psalm 127 this important sentence is written: Unless the Lord builds the house, those who build it labour in vain. One can make a great effort in a Church Congregation, plan and work, but the road and the destination must always be the communion with God. Martin Luther, whose name we bear as a Congregation, once wrote: “Faith and love are the entire essence of a Christian person. Faith receives, love gives. Faith brings people to God, love brings him to the people. Through faith he lets God be benevolent towards him, through love he is benevolent towards people.” If we should make a wish in our anniversary year, it should be that we strive forward with this awareness and that our Congregation will continue to be a place of this faith and this love. – Stefan Wolf, Pastor, November 27, 2005 1st Advent

Today we celebrate our 50th anniversary. How gracious and merciful was the Lord. Over these years, we were blessed with four pastors. The founder was Pastor Karl Wulf, 1955-1958, who received a calling in 1954 to establish a congregation in Toronto for all new German speaking immigrants arriving from Europe. This is how our Martin Luther Church was begun in 1955. Pastor Otto Winter served the congregation from 1959-1964. Pastor Eberhard W. Schwantes was our minister from 1964-2000, followed in 2000 by Pastor Stefan Wolf. We are thankful to our Lord that He has sent them to us. They were truly the fathers of our congregation, with the help of our Church Council, the various groups and all our members who participated. It cannot have been easy to bear such a responsibility, as it demands continual exertion and energy. We pray that we can give the pastor(s) much needed encouragement and support. As in every congregation, the responsibilities can be tiring and one can easily lose courage. My thoughts go to Pastor Eberhard W. Schwantes, who was with us the longest and started many of our projects, which are now continued and expanded by Pastor Stefan Wolf. With every new pastor that came to us, we have had to adjust to the new methods but in every situation our Lord has helped us to conform. For most of us it was a step forward, for some of us it was a new way. However, we are like a big family that holds together. What began 50 years ago now continues to thrive. We are still a very strong German-speaking church with our English congregation getting ever stronger. How wonderful our church has become, how beautiful the sunrays shine through our brilliant windows and how heartwarming it is to hear the children playing and learning in our rooms downstairs! These are the children from our Sunday school and Kindergarten. The work was begun by Pastor Schwantes and brought to life to the fullest by Pastor Wolf. It is good to give thanks to the Lord for receiving His blessing in all the work we do, but may we never forget that honour and glory go to Our Lord alone. With brotherly co-operation and love there is much that we can do in our congregation under God’s guidance. I hope and pray that we continue to share His message and love for many years to come. – Ernie Wienecke, Church Council President, on the occasion of the 50th anniversary of our Martin Luther Church on November 27, 2005 1st Advent 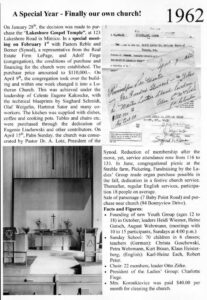 On January 28th, 1962 the decision was made to purchase the “Lakeshore Gospel Temple”, at 123 Lakeshore Road in Toronto-Mimico, Ontario from the Pentecostal Assemblies of Canada. In a special meeting on February 1st, 1962 with Pastors Reble and Berner (Synod), a representative from the real estate firm LePage, and Adolf Fiege (congregational member), the conditions of purchase and financing for the church were established. The purchase price amounted to $110,000. On April 9th, 1962 the congregation took possession of the building and within one week changed it into a “Lutheran Church”. This was achieved under the leadership of Celestin Eugen Kakoschke, with the technical blueprints by Sieghard Schmidt, Olaf Weigelin, Hartmut Sator and many co workers. The kitchen was supplied with dishes, coffee and cooking pots. Tables and chairs were purchased through the dedication of Eugenie Lischewski and other contributors. On April 15th, 1962 on Palm Sunday, the church was consecrated by Pastor Dr. A. Lotz, President of the Synod. Reduction of membership after the move, yet, service attendance rose from 116 to 133. In June 1962, congregational picnic at the Strehle farm, Pickering. Fundraising by the Ladies’ Group made the purchase of an organ possible in the Fall of 1962, followed by dedication in a festive church service. Thereafter, regular English services, participation 18 people on average. 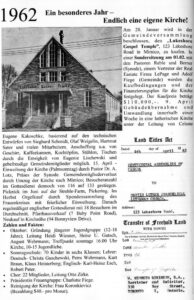 Mrs. Koronkievicz was paid $40.00 per month for cleaning the church.

Click on a photo to open the 128 pages in a photo gallery.