Background of the church

The Second World War and the great destruction of Germany resulted in a huge wave of emigration. Many Germans who had lost their homes sought a new beginning and a secure life in Canada.

As in many other cities, the believing Lutherans in Toronto joined together because they wanted to remain true to the faith of their fathers and their mother tongue. As early as the early fifties, Toronto’s German-speaking church services were held in various churches. Active groups emerged, which grew relatively quickly to independent communities recognized by the local church authorities.

The Martin Luther Congregation was one of those groups that has grown to become a strong and faithful congregation within the then Lutheran Churches Association in North America ( now the ELCIC) by adhering to the faith and actively cooperating with each other’s members.

Already in 1955, the first step to self-governance was undertaken with a German pastor. Pastor Karl Wulf, the first pastor of the young Martin Luther congregation. Under his successor, Pastor Otto Winter, the desire of the community to own a house of worship came true. In 1962, our present church was solemnly inaugurated under the participation of the President of the Synod and other representatives of the Lutheran Church in North America and entrusted to the community as a permanent home. Over the years, the church building has been embellished and enlarged by two extensions, consisting of a large entrance hall, office and meeting rooms.

In February 1959, Pastor Otto Winter started in the MLC. With him, the cong 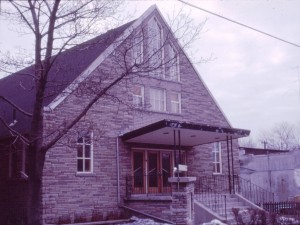 regation succeeded in purchasing its own building in Mimico (South Etobicoke), 2379 Lake Shore Boulevard  West. On the 15th of April, 1962, MLC celebrated a first festive service in its church, after having done extensive renovation works. In autumn 1962, the new organ was consecrated.

In April 1964, Pastor Winter followed the call to serve in the German Seamen’s in New York.

The building in 5 Superior Avenue which was to serve as the day care building was purchased in 1969.

In 1970, a day care centre was been established on the initiative of Pastor Eberhard W. Schwantes in the adjacent building 5 Superior for 21 children. This was, from the very start, intended to be a social institution for the district of South Etobicoke, as in the surrounding area of the church there lived numerous families in need and single parents. The congregational members of the Martin Luther Church put forth much effort, time and again, with love and dedication. Meals for the children were cooked by the ladies of the church. Craftsmen’s skills were needed for building alterations and extensions. Over the years considerable extensions of the program took place.

The two-storey-extension with pastor’s office and meeting rooms was consecrated in June 1982. On October 18, 1992, the new, largely expanded main entrance was celebrated in a service, presided by Bishop Dr. W. Huras.

Pastor Eberhard W. Schwantes, who served the MLC for 35 years, expressed what the church meant to many: “For me, the congregation meant always also family, and therefore, a lasting bond and responsibility. The family that is under God’s word, grants protection against the outside world, it is a refuge where one is safe, where one finds community and comfort.” 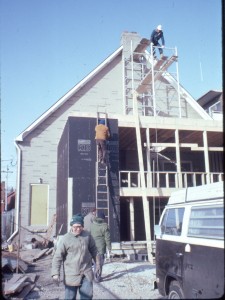 Addition to back of church

In December 2000, Pastor Stefan Wolf was installed, following a contract between MLC, Eastern Synod and EKD/Germany which had commissioned him. For the 50th anniversary in 2005, beautiful stained glass windows were installed, thanks to generous donations of many members. In August 2007, Pastor Alexander Mielke started to serve as pastor, commissioned by EKD as well.

Today, MLC has more than 300 members. For more than sixty years, they have been a bilingual Lutheran congregation, nowadays with church services in English at 9:45 a.m. and in German at 11:00 a.m. Once a month they conduct a bilingual German-English Service for celebrating the fellowship of both parts of our congregation.

We have a radio devotion every Sunday in German on the multicultural radio station AM 530. We have continually supported the food bank of the Wesley Mimico United Church, the Canadian Foodgrains Bank among other missional projects.

Otto Winter (April 26, 1912 – December 16, 1983)
Pastor Winter was born in Mösin, Germany. He was educated at the Kropp Seminary in Germany and the Lutheran College and Seminary in Saskatoon, Saskatchewan, Canada. After graduation in 1934 he was ordained and served the following congregations:

Pastor Winter was honoured by the West German Government in 1967 with th “Officers’ Cross of the German Order of Merit.”

Otto is mourned by his wife the former Esther Jüttner whom he married in Winnipeg, Manitoba in 1935, his three sons – Werner and Arthur of Toronto and Mark of San Diego and 6 grandchildren.

The funeral service will be held on Saturday, December 17, 1983, at 10:00 a.m. at St. George’s Lutheran Church, 410 College St., Toronto. The service will be conducted by Bishop William Huras, Pastor Eberhard W. Schwantes and Pastor Joachim Knaack.

– Written by Bishop William D. Huras, December 15, 1983. Exerpted from “The Order of Service for the Funeral of Rev. Otto Winter”.