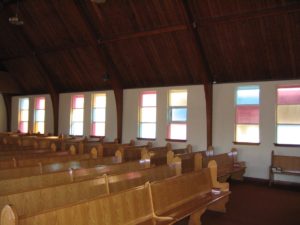 It was the longstanding wish of the congregation to replace the pink-blue-yellow windows in the nave with stained glass windows. It was time. The windows were replaced because they were old and leaky and not energy efficient by current standards – allowing in heat in the summer, and cold in the winter.

In 2002 work was begun. A committee was formed by our church council (Sieghard Schmidt, Olaf Weigelin, Heinz Gutsch, Edmund Scholz, Horst Zimmer, and Hans-Joachim Arndt) and a design studio and manufacturer and installers were chosen. 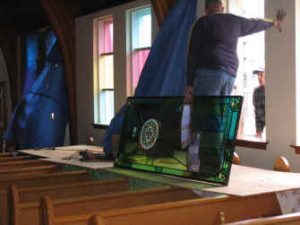 After many conversations and discussions, a small group conveyed the wishes of our congregational members to the artists in a meeting in August e.g. use of biblical stories from the Old and the New Testament, use of symbols, no portrayal of figures, each window is represented by two symbols. The committee attempted to accommodate all ideas and wishes of the congregation. 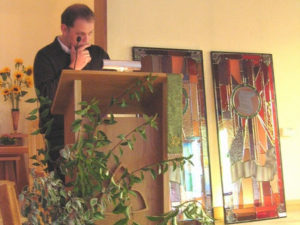 Repla Windows and Doors, from Oakville, Ontario – Walter Peterson, Klaus Buchholz and Barry Ayers – installed them. To protect the artists’ stained-glass windows from breakage they were mounted and installed between two panes of clear break-proof glass.

Pastor Stefan Wolf said “Even though it is impossible to satisfy the tastes of all, I think that we will enjoy the illustrated Bible stories that our windows will make, in a statement to our visitors.”

Each window is represented by two symbols, respectively. All twenty of the windows (ten on the right side and ten on the left side) are connected by a white ribbon. On the right(West) side of the church nave, these ten windows depict our church liturgical year: Advent, Christmas, Epiphany, Free Time, Palm Sunday, Maundy Thursday, Good Friday, Easter, Pentecost, and, Trinity. They were inaugurated on October 5, 2003 in the Thanksgiving Day Service led by Pastor Stefan Wolf.

The second set of windows on the left (East) side of the church nave, were inaugurated on April 25, 2004, in a special service led by Pastor Stefan Wolf. These ten windows depict our important symbols of faith: God / Father, Word of God, Christ, The Holy Sacraments, and, The Congregation.

Pastor Stefan Wolf summed this project up, “We, as Christians, are living stones and form the house of God. So as God’s building, we are living signs of his kindness. The congregation can truly be proud to have such beautiful windows.”

Special thanks to those who donated the cost of the windows, the families and friends of congregational members. The costs per window amounted to approximately $3,000 to $3,500 each. Several persons donated, for instance in remembrance for family members who have passed away. 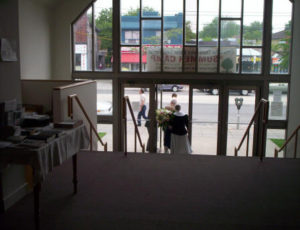 The Windows in the Front Entrance

The same artists who designed and manufactured the stained-glass windows in the church nave also produced the cross at the entrance to the church which was completed in 2006. The inauguration service was held a few years later on September 11, 2009 led by Pastor Alexander Mielke together with the dedication of the donation plaque. 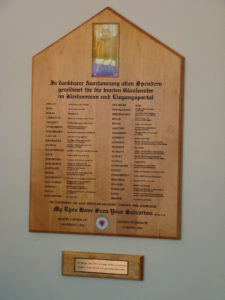 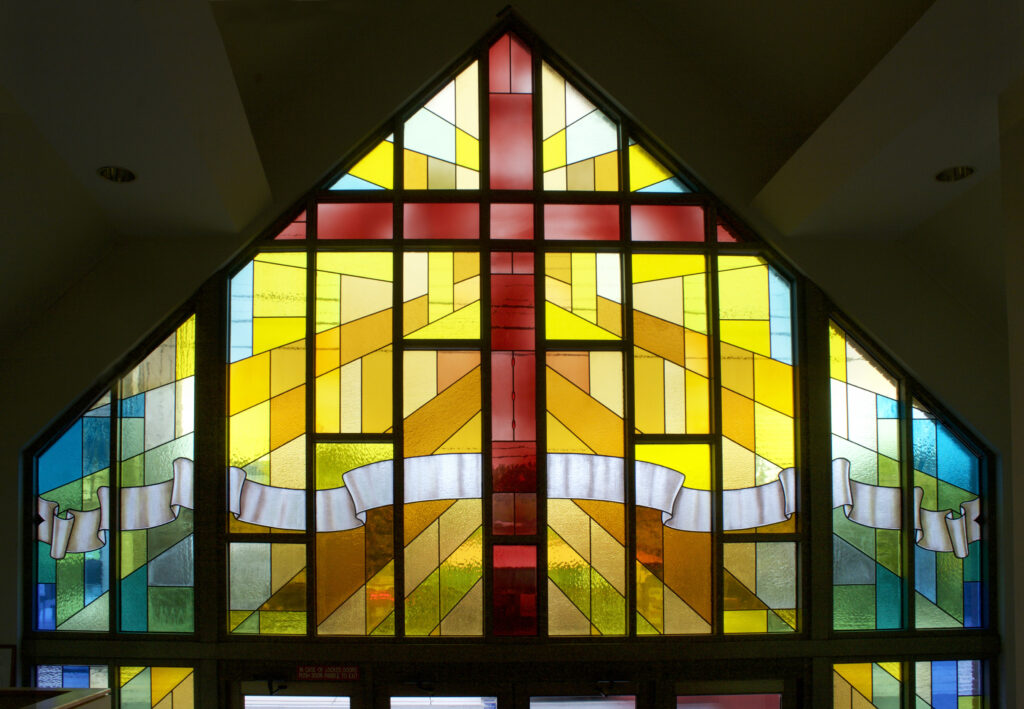 Explanations of the Symbols for the 20 windows 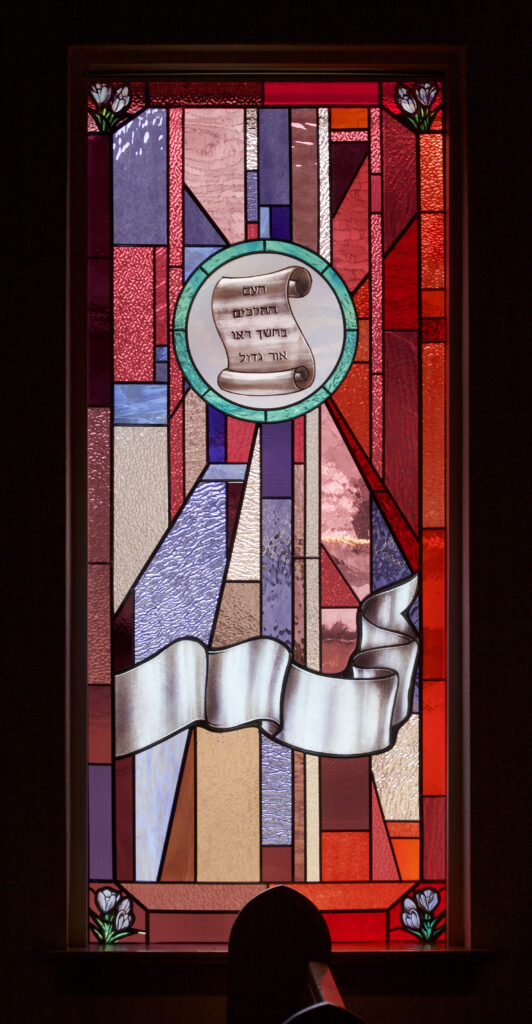 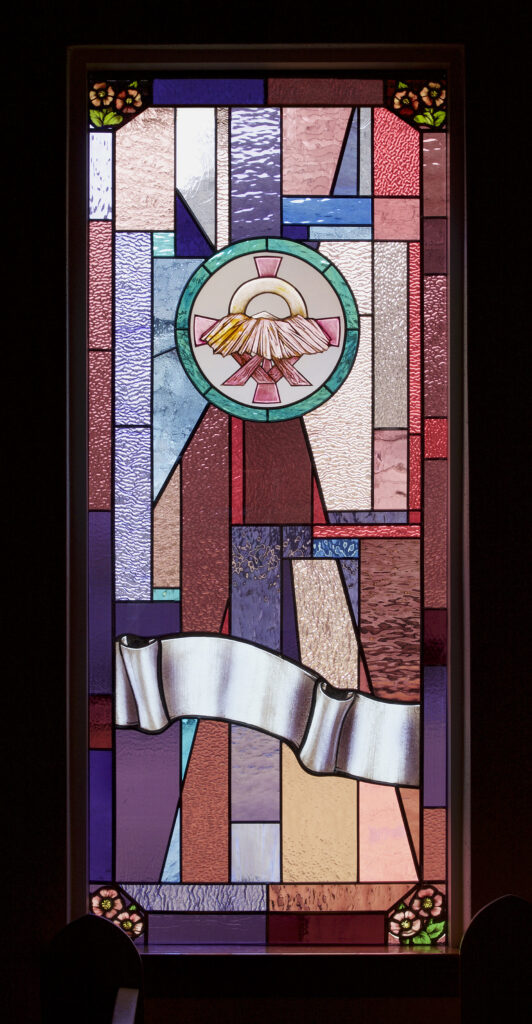 2. Christmas The Birth of Jesus Symbol: Manger Flower: Christ-rose = Hope Luke 2:10-11 And the angel said to them, Be not afraid: for behold, I bring you good news of a great joy which will come to all the people: for to you is born this day in the city of David a Savoir, who is Christ the Lord. 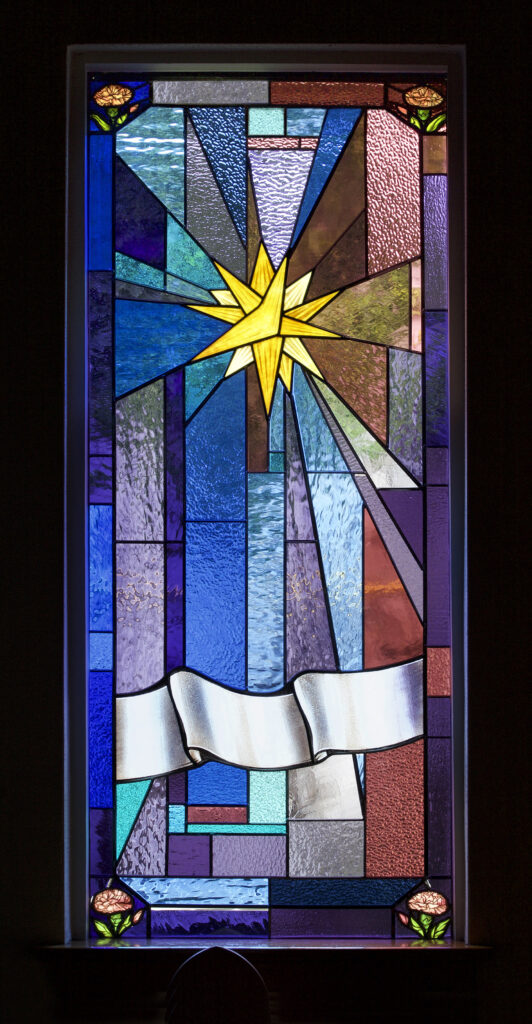 3. Epiphany God appears in person Symbol: Star Flower: Carnations = Symbol of pure love Matthew 2:2 “Where is he who has been born king of the Jews? For we have seen his star in the East, and have come to worship him.” 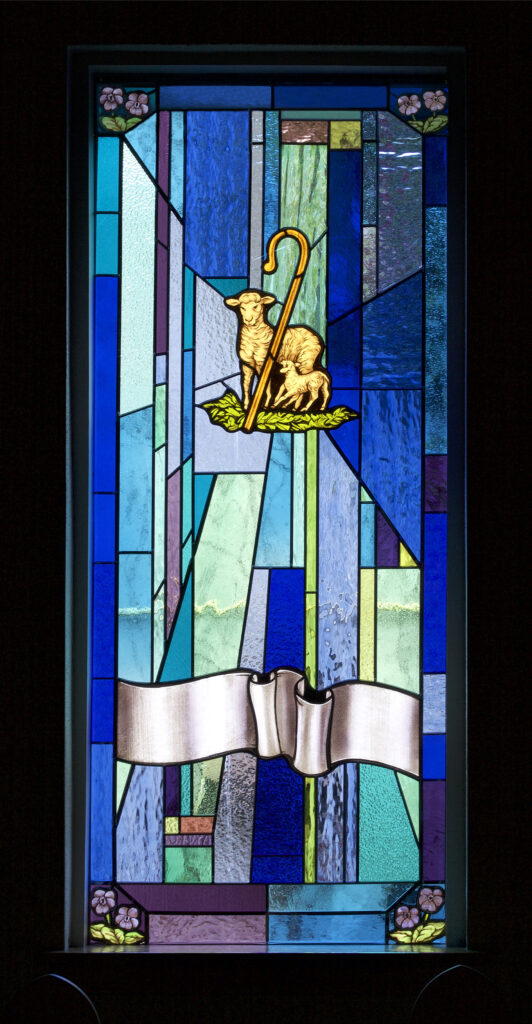 4. Free Time Period between major festivals during the church year Symbol: Shepherd’s rod (Jesus the good shepherd) Flower: Violet = Humility John 10:14 I am the good shepherd; I know my own and my own know me. 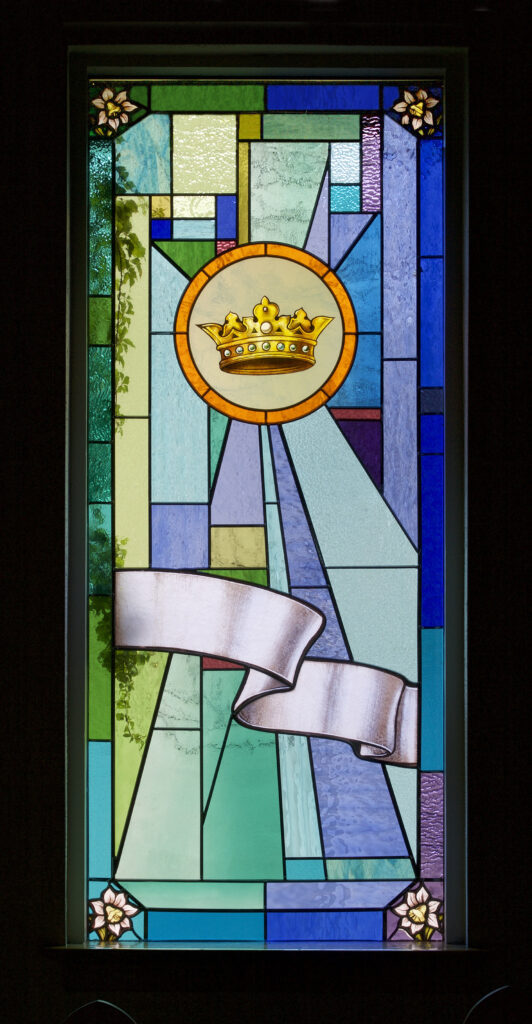 5. Palm Sunday Jesus enters Jerusalem as King Symbol: Crown Flower: Daffodils = Triumph of love over sin Matthew 21:8-9 Most of the crowd spread their garments on the road, and other cut branches from the tree and spread them out on the road. And the crowds that went before him and that followed him shouted, “Hosanna to the Son of David! Blessed is he who comes in the name of the Lord! Hosanna in the highest!” 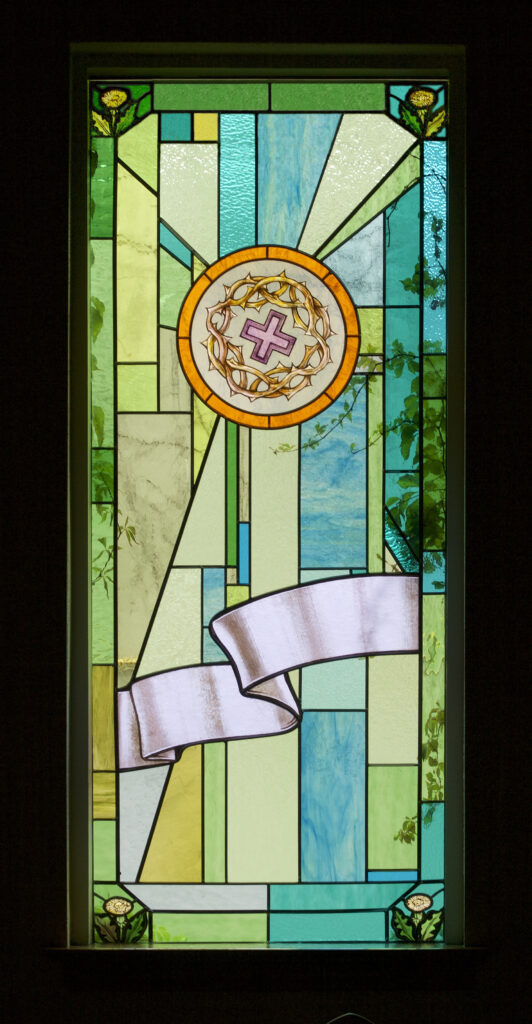 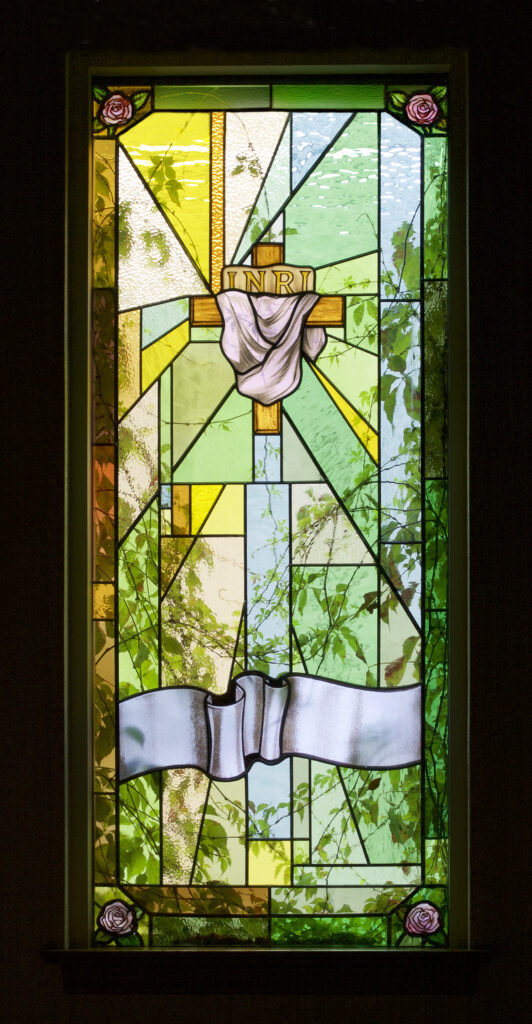 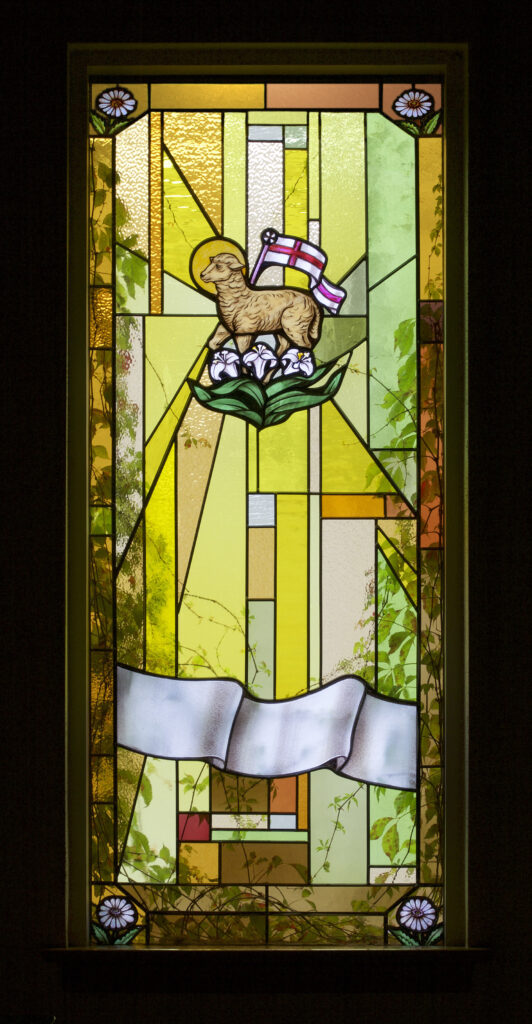 8.  Easter Resurrection of Christ Symbol: Lamb of God Flower: Daisy = Innocence Revelation 5:12 Saying with a loud voice, “Worthy is the lamb who was slain, to receive power and wealth and wisdom and might and honor and glory blessing!” 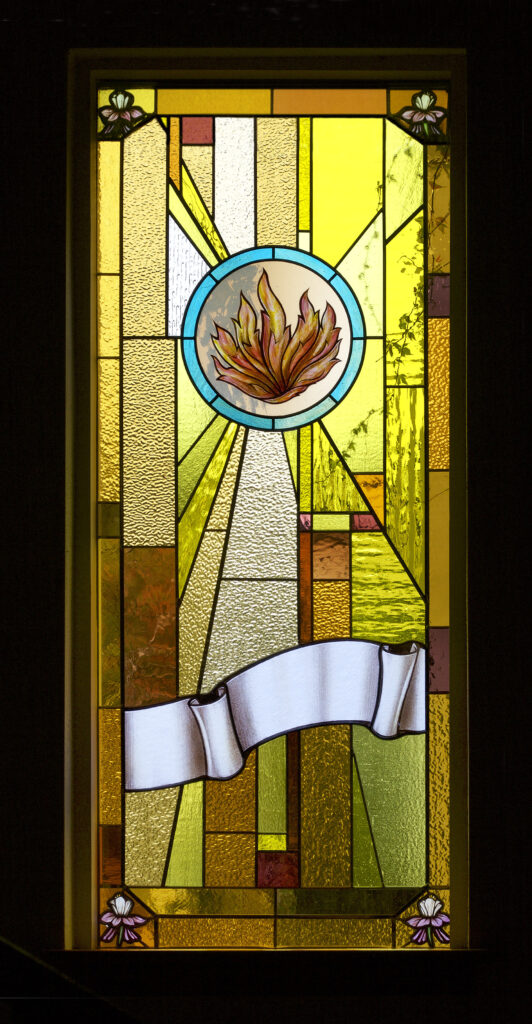 9. Pentecost God gives his Holy Spirit Symbol: Fire Flower: Columbine (Akelei) = Symbolic Flower for the Holy Spirit Acts 2: 3 & 4 And there appeared to them tongues as of fire, distributed and resting on each one of them. And they were all filled with the Holy Spirit and began to speak. 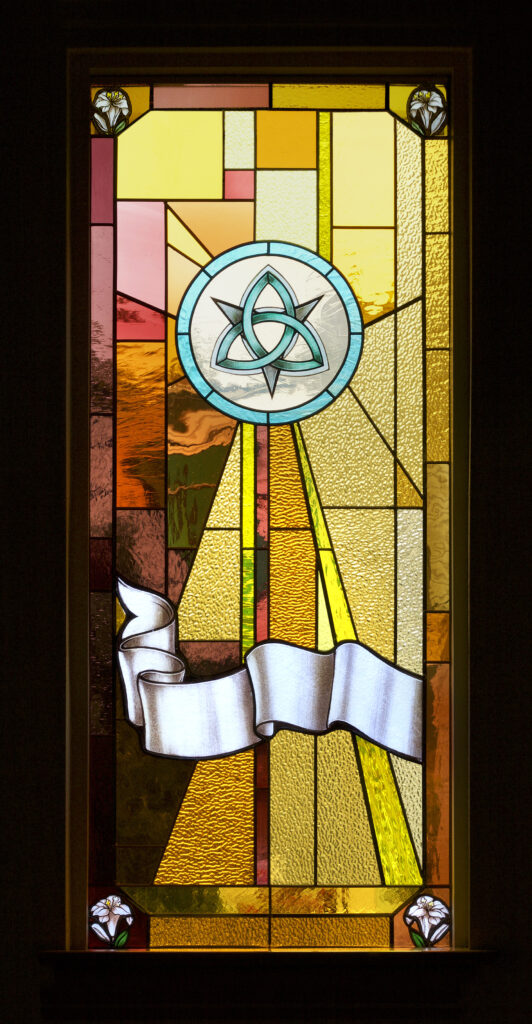 10. Trinity One God and the three persons of the divinity, Father Son, and Holy Spirit Symbol: Symbol of Trinity, interwoven lines with no endings Flower: Lilly = Purity, Symbolic flower for the Trinity as such Matthew 28:19 Go therefore and make disciples of all nations, baptizing them in the name of the Father and the Son and the Holy Spirit. 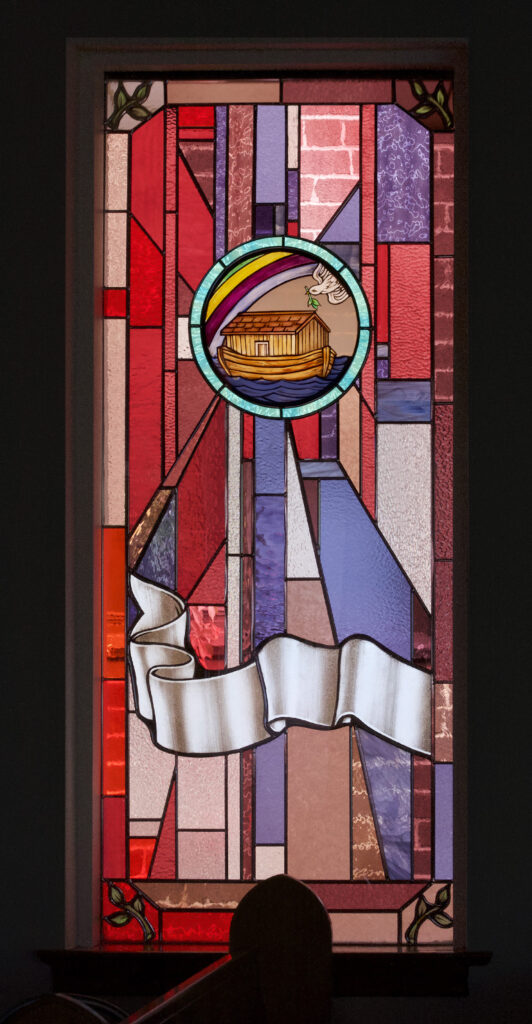 11. Noah’s Ark God the Father Topic: Repentance / God saves; Corner: Olive branch – sign of hope Genesis 8:10-11 The beginning of his kingdom was Babel, Erech, and Accad, all of them in the land of Shinar. From that land he went into Assyria, and built Nin’eveh, Reho’both-Ir, Calah. 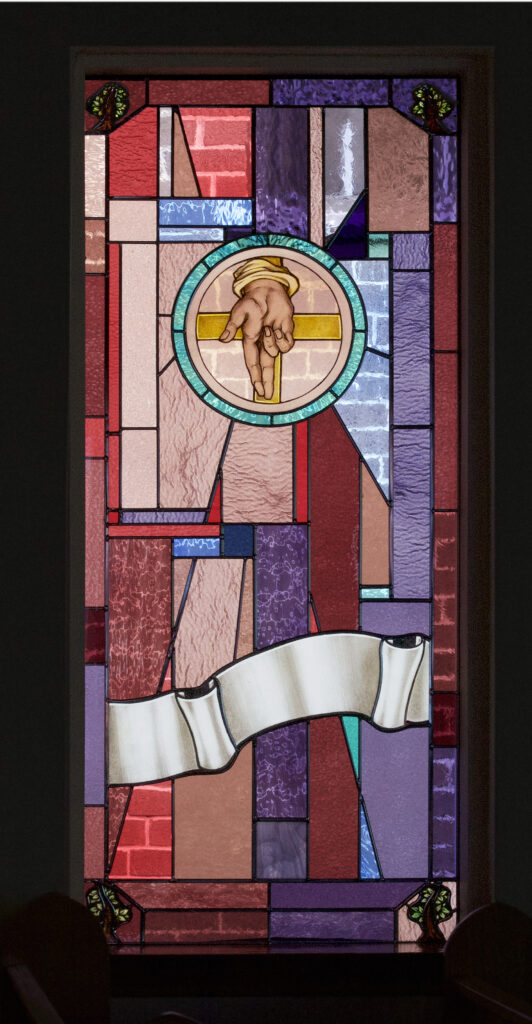 12. Hand of God God the Father Topic: God’s Hand = Creation Corner: Tree = paradise and disobedience of mankind Genesis 2:9 And out of ground the Lord made to grow every tree that is pleasant to the sight and good for food, the tree of life also in the midst of the garden, and the tree of knowledge of good and evil. 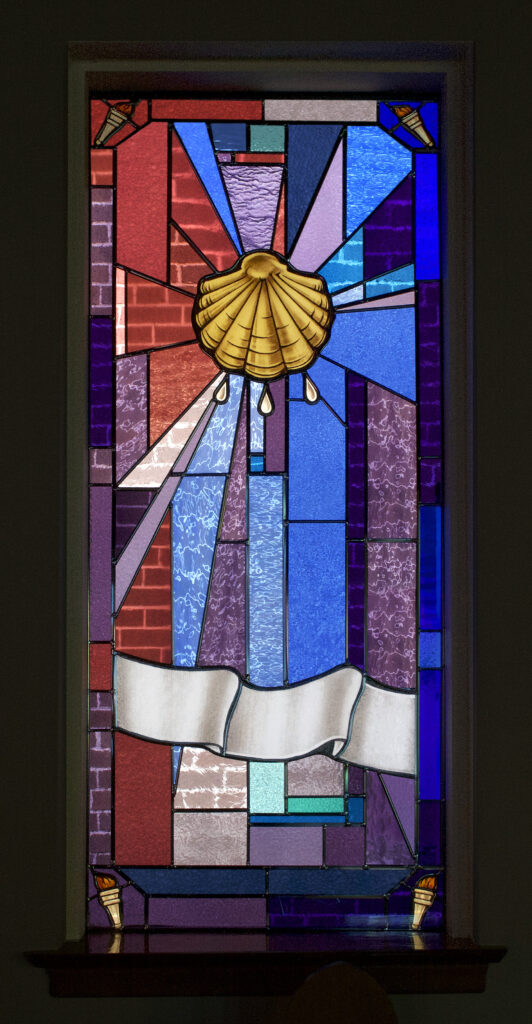 13. Shell God’s Word Topic: Mission; Shell as symbol for spreading the word of God; Corner: Light John 8:12 Jesus spoke to them, saying, “I am the light of the world: he who follows me will not walk in the darkness, but will have the light of life.” 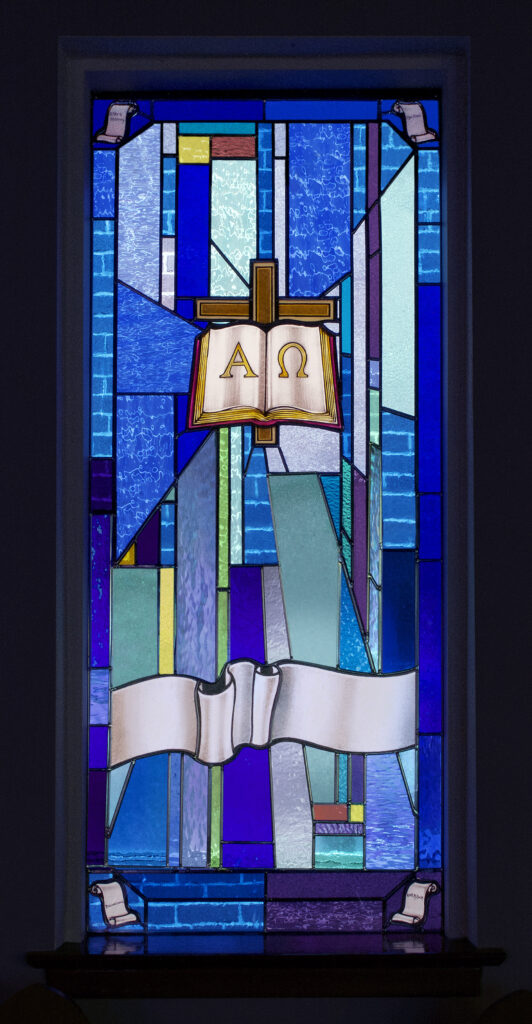 14. Alpha and Omega God’s Word Topic: The Holy Bible and the Christ Monogram; Corner: Scroll Revelation 1:8 “I am the Alpha and the Omega,” says the Lord God, who is and who was and who is to come, the Almighty Alpha and omega which are the first and last letters of the Greek alphabet refers to “I am the alpha and the omega”, in the Book of Revelation “the beginning and the end” (Revelation 21:6, 22:13) to mean that Jesus has existed for all eternity or that God is eternal. 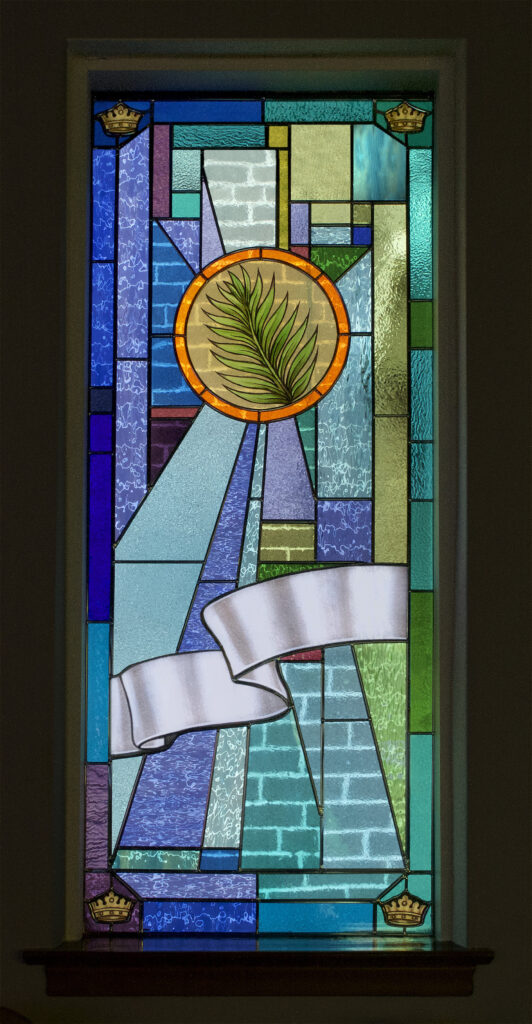 15. Palm Branches Christ – Son of God Topic: Christ’s victory; Jesus enters Jerusalem; Corner: Palm branch OR Crown? John 12:13 So they took branches and palm trees and went out to meet him, crying, “Hosanna Blessed is who comes in the name of the Lord, even the King of Israel!” 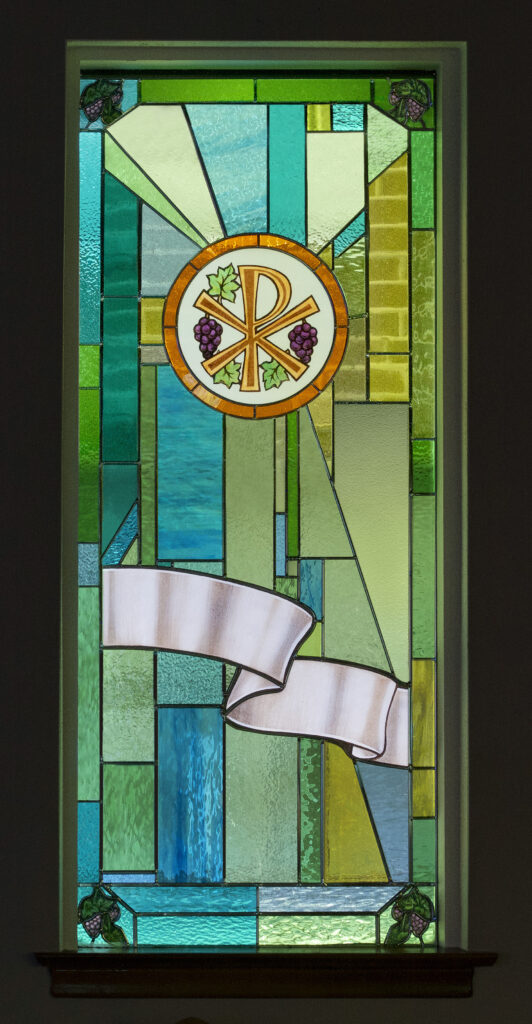 16. Christ Symbol/Chi-Ro Christ – Son of God Topic: Christ the vine – we, the branches; Christ’s Monogram; This Chi Rho symbol is derived from the first two letters of the word “Christos” (ΧΡΙΣΤΟΣ) in the Greek alphabet Corner: Vine John 15:5 I am the vine, you are the branches. He who abides in me, and I in him, he it is that bears fruit, for apart from me you can do nothing. 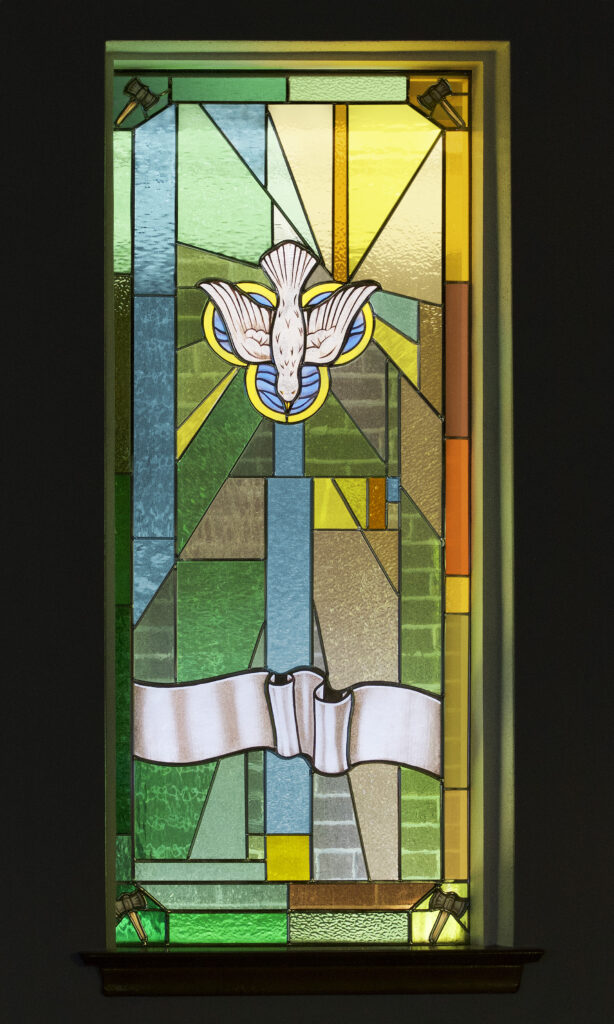 17. Water and Dove The Holy Sacraments Topic: Baptism;
Corner Axe – according to the preaching of John the Baptist the symbol of judgement and decision Matthew 3:10 Even now the axe is laid to root of the trees: every tree therefore that does not bear good fruit is cut down and thrown into the fire. 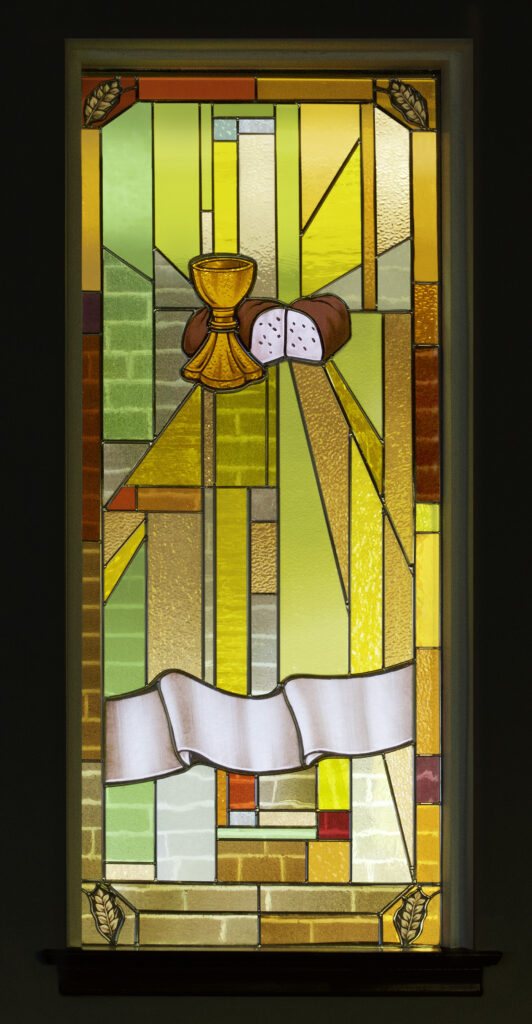 18. Chalice and Bread The Holy Sacraments Topic: Holy Communion; Corner: ear of corn, the many grains, but one body in Christ John 6:35 Jesus said to them, “I am the bread of life: who comes to me shall not hunger, and he who believes in me shall not thirst. 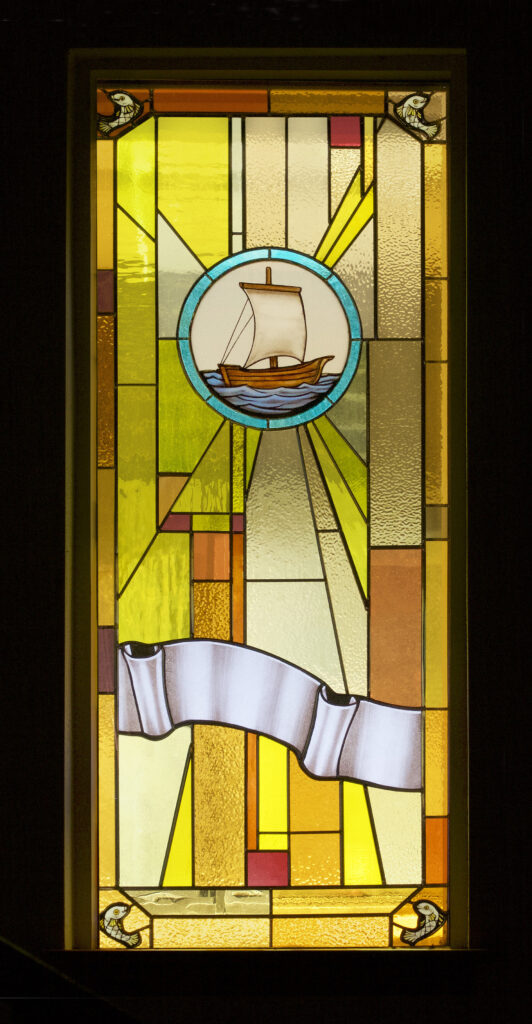 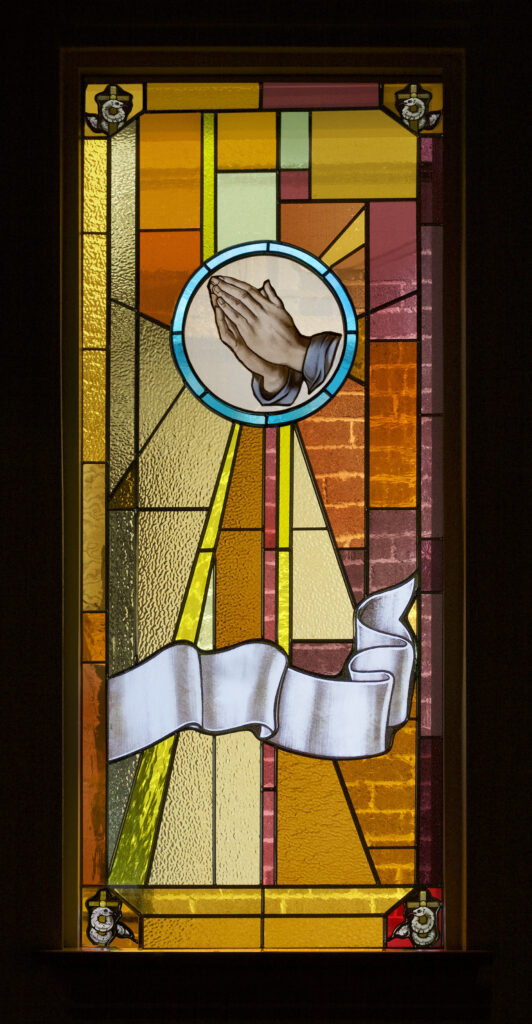 20. Praying Hands The Church – Community of Believers Topic: Prayer;
Corner: Serpent, symbol of temptation
John 3:14
And as Moses lifted up the serpent in the wilderness, so must the Son of man be lifted up.
1.Thessalonians 5.16-18
Rejoice always, pray constantly, give thanks in all circumstances; FOR THIS IS THE WILL OF God in Christ Jesus for you.