The Story of a Lilac Tree

“It started with a lilac tree” reads the Toronto Star article published on May 8th, 1970, when the child care first opened. The idea for the child care was originally proposed to the Martin Luther Church congregation by Pastor Eberhard W. Schwantes, with the mission to give the neighbourhood’s children a safe place to play. His son Michael Schwantes recalls that the idea came to his father as he was looking out the window from the church office. “It was because he saw the children playing in the parking lot, and they had nowhere to go” he explains, “he said … they needed a place to go.”

It would be a long year of work before the child care could welcome the children of the Mimico neighbourhood – as the 1970 Toronto Star article puts it, “Then came operation elbow grease.” In May 1970, the building opened its doors to the community at large, and started to provide care for 26 neighbourhood children.

Before long the child care grew to include a toddler, preschool, and school age program. It even expanded to the basement of the church at 2379 Lake Shore Boulevard West. Today, the organization is licensed to provide care for up to 56 children ages 18 months to 12 years of age.

Timecapsule 1970 – Exerpt from our History book: 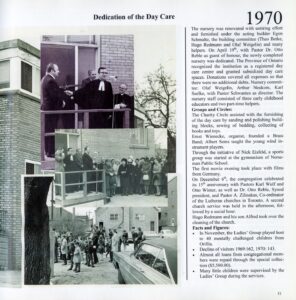 The nursery was renovated with untiring effort and furnished under the acting builder Egon Schmaltz, the building committee (Theo Betke, Hugo Redmann and Olaf Weigelin) and many helpers. On April 19th, 1970 with Pastor Dr. Otto Reble from the Synod as guest of honour, the newly completed nursery was dedicated. The Province of Ontario recognized the institution as a registered day care centre and granted subsidized day care spaces. Donations covered all expenses so that there were no additional debts. Nursery committee: Olaf Weigelin, Arthur Neukom, Karl Seelke, with Pastor Eberhard W. Schwantes as director. The nursery staff consisted of three early childhood educators and two part-time helpers.

Groups and Circles:
The Charity Circle assisted with the furnishing of the day care by sanding and polishing building blocks, sewing of bedding, collecting of books and toys. 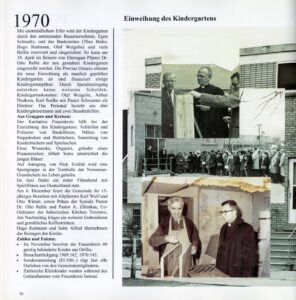 Ernst Wienecke, organist, founded a Brass Band; Albert Sems taught the young wind instrument players. Through the initiative of Nick Eisfeld, a sports group was started at the gymnasium of Norseman Public School. The first movie evening took place with films from Germany.

On December 6th, 1970 the congregation celebrated its 15th anniversary with Pastors Karl Wulf and Otto Winter, as well as Dr. Otto Reble, Synod president, and Pastor A. Zilinskas, Co-ordinator of the Lutheran churches in Toronto. A second church service was held in the afternoon, followed by a social hour.

Hugo Redmann and his son Alfred Redmann took over the cleaning of the church.

Facts and Figures:
In November, the Ladies’ Group played host to 40 mentally challenged children from Orillia.

Almost all loans from congregational mem bers were repaid through the special collection ($5,500.00).

Many little children were supervised by the Ladies’ Group during the services.

Click on a photo to open the photo gallery